You are here: Home / Archives for spirit / grieving

No one makes me cry with Johnny Cash. It’s not close.

A little over 11 months ago on February 25, 2012 it was grieving for my father-in-law’s pending death. This year it’s for my dad’s limited time on this earth.

His voice is just hauntingly beautiful especially late in his life with his American Recordings.

So going to pick some other Johnny Cash songs that are getting to me right now.

The first is from American IV “The First Time Ever I Saw Your Face”. Again Mr. Cash just totally deepens an already beautiful song. And it’s a song about love. My mom and dad are a dyad and people who have always been deeply, deeply in love. As were Johnny Cash and June Carter Cash. And my father in law and mother in law Walter and Dottie Maheux.

Then there is “For the Good Times”. My mom and dad have had a lot of them. And I know she is grateful that for the first 4+ years of my dad’s brain cancer they were able to spend time together. Including an RV trip from PA to Phoenix to Boise, Idaho just this summer. I am really worried about my mom without dad.

And here are some from the first post. One is Johnny Cash’s stunning cover of the Beatles “In My Life.” We don’t know how long we have on this planet so cherish the good times and try to bring joy.

Another amazing cover is from my mom’s favorite band Simon and Garfunkel, and one of her favorite songs “Bridge Over Troubled Water.” I am swimming in troubled waters, and it’s important to cry sometimes. Especially when I have time to reflect.

And we are all mortal on this planet. Eventually it’s our time. Dad’s time is going to come soon. Sooner or later God will cut you down. Looks like for my dad it’s this winter. I am mostly ok with that now. I have had great time. But I do worry about my mom, I worry about her a lot.

And thank you everyone so much for your thoughts and prayers. It means a lot.

I was feeling more prayerful at the time, with my practice of heart prayers. It helps center and ground me.

Unfortunately, nothing ungrounds you like sickness and tragedy. And it didn’t take long this year. The winter was a time to found out my father in law had been hiding symptoms for a long time. It was only a couple months later that he passed away.

It was a blessing to live close to my in-laws and see the process and help where I could. It was also easily the most spiritual moment of the year to see Walter Maheux pass from the world of the living to the dead.

Lanna was shattered by her father’s death, I was upset and extremely sad.

The spring and summer Lanna was especially sad and introverted. By the late summer we were started to feel like ourselves again. Then my dad’s brain cancer returned in late August.

Our lives felt shattered again. Big tumor in his left thallmus. At first we were told it was inoperable. Then they were able to remove it with the same brain surgeon that did the first tumor removal.

Since then I have been very sad. It’s just shattering.

So my goal for 2013 is to work for a new normal and have a year of acceptance in 2013. Accepting who I am. Accepting that my dad is sick. Accepting my quirks. Developing more patience. A lot that I have been working on, a lot that I am continuing to work on.

But 2012 was a challenging year. And I still feel very spiritual. I don’t however feel as connected to church as I have been. So it goes.

And it’s important sometimes to realize it is what is. And that life is what happens when you make other plans.

Just talked to my mom tonight.

Looks like dad is being discharged from skilled nursing in a couple weeks and had a massive stroke in the CT scan at the Lehigh Valley hospital in late September.

We didn’t know. We knew there was a small stroke during the brain tumor removal surgery but not a massive stroke.

Still, it’s a hard word to hear. I hope home care works well, it’s going to be a challenge.

And it sucks that I am 8 hours away. At least I do plan to be there in 3 weeks for Christmas.

Came home after working a late shift that I swapped out so I could go to a funeral on Monday for the fabulous Dot Mithee to random fireworks.

Well maybe not really that random it was the raindate for the rained out Westbrook Together Days.

Fireworks bore me most of the time. I almost find the impressions that fly away more interesting.

Also don’t feel much like celebrating. Lost 2 amazing people to cancer this year. My mother in law’s 2 best friends in the world. Both fabulous. I hurt. My wife hurts. And I feel pretty numb.

Hoping to have fun next week at my 20th HS class reunion but right now mainly just feeling numb and a little (or a lot) broke.

I hope sometime with old friends (ok mostly acquaintances that I “friend” on Facebook) and with the wife will be good next weekend.

Right now though, I mainly just feel numb and exhausted. I hope the rest of the year has no grief, I have already had way more than my share. 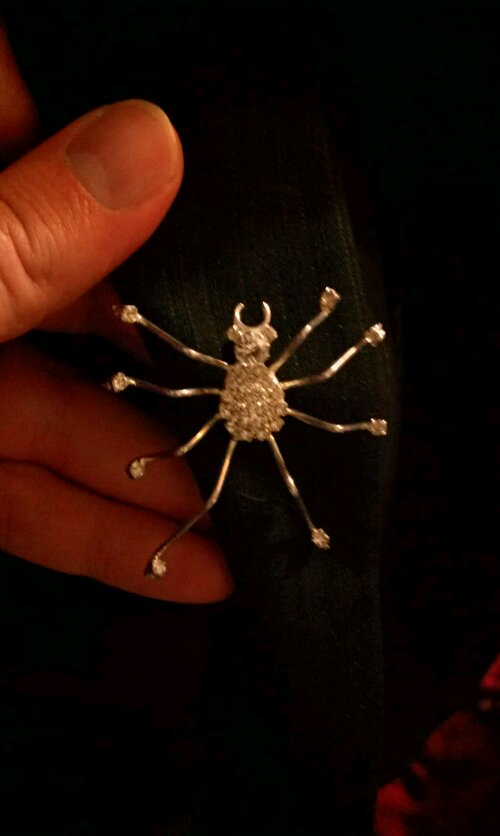 This is a pin I got from Dot Mithee’s funeral today from her personal collection. The spider has always attracted me. Weaving the web of it’s existence.

Dot’s legacy is special. Great friends like my mother in law Dottie Maheux. A great spirit. And wonderful gifts to Hallowell and her community. She died last Tuesday, June 12, 2012.

She was one of the founding members of the Hallowell Food Bank in 1988 and worked there for many years including as president and treasurer. She worked and volunteered for the Big Brothers/Big Sisters, and Catholic Charities. Was active in local Democratic politics and served as a Hallowell city counselor. She even won the Hallowell Spirit of America Award on several occasions, and eventually became president of the foundation.

She was a wonderful and amazing spirit. Her smile and laughter just brightened a room. She is loved and missed by all who knew her.

May we all weave such a web.